What is happening at SmartTrade

News and views from the SmartTrade crew.

Posted by SmartTrade Techs on Wednesday, 19 October 2016 in News and Announcements 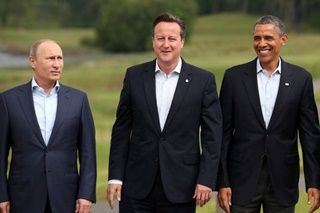 To finish on a bit of humour

David Cameron, Barack Obama and Vladimir Putin all die and go to Hell. As they arrive at the gates of Hell they spy a golden phone and ask the Devil what the phone is for. The Devil tells them it is for calling back to Earth.

Obama asks to call the US and talks for an hour. When he is finished the Devil informs him that the standard Hell to Earth call charge is 1 million US dollars per hour, so Obama writes a cheque for 1 million USD.

Finally, David Cameron gets his turn and talks to the UK for 4 hours. When he is finished the Devil informs him that the standard call charge is 12p.

Obama and Putin go ballistic and demand to know the why Cameron got to call the UK virtually free when it cost them 1 million US dollars an hour?

The Devil smiles and replies:

"After BREXIT the UK went to hell, it's now a local call to the UK!"

Doug Smith is on his deathbed and knows the end is near.

His nurse, his wife, his daughter and two sons are with him.

So, he says to them:

"Bernie, I want you to take the Mayfair houses."

"Sybil, you take the apartments over in the east end."

"Jamie, I want you to take the offices over in the City Centre."

"Sarah, my dear wife, please take all the residential buildings on the banks of the river."

The nurse is just blown away by all this and, as Doug slips away she says, "Mrs Smith, your husband must have been such a hard-working man to have accumulated all this property."

Sarah replies, "Property? .... The asshole had a paper run."

Super User has not set their biography yet